The Execution of Nicholas Baxter 1907

The Execution of Nicholas Baxter 1907

Nicholas Baxter was the last man hung at Darlinghurst Gaol, hangings after that time were performed at Long Bay Prison. The newspaper report made mention of the older traditions of a hanging were pared away. NSW  in the later part of the  1800’s had the same hangman (read the post Robert Rice Howard, Executioner NSW 1873-1903) for 30 years, he retired just a few years prior to this hanging and must have had his own ways of going about the hanging.

The inquest concerning the death of Mrs. Mary MacNamara, who was murdered at Sarah Street, Enmore, on 5th instant, was held today.

Nicholas Baxter was present in custody. The prisoner occupied a seat at the table, and appeared composed. Sergeant Curry said that at the police court, Baxter said, ‘ I don’t know what possessed me to do it.

I must have been mad. I did not intend to hurt the poor old lady, but she would not’ keep quiet. After what I had done I took train for Homebush.’ Baxter said his ‘object was money.

”If I had got a few pounds, he said, ‘I would have gone to Queensland. It is a bad job for the wife and children. ‘The Coroner found that Baxter wilfully murdered deceased, and committed him for; trial.

Nicholas Baxter, the man held for the brutal murder of Mrs. Mary Macnamara, at Enmore, on Tuesday made a confession.

At 9 a.m he was driven in a cab with two officers from the Burwood police station to the morgue at Circular Quay, and in the presence of the City Coroner (Mr. A. N. Barnett), Dr.Hardman, nephew of the murdered woman, and the police, identified the body.

It’s rather dark, I can’t see, be remarked as he stood before the glass partition running along the front of the chamber. He was taken along through a doorway, and allowed to stand beside (he slab, ‘ That’s the body of Mrs. Macnamara — I know her, ‘were his words Baxter was next taken to the Water Police Court, and while Sergeant Curry was Standing near the door be leaned forward, and, speaking in a low, husky voice, confessed that lie was guilty. He intimated that later he would put his statement in writing.

Five charges were shortly afterwards preferred against’ the prisoner He pleaded guilty to having been drunk in Bridge road, Strathfield, on Monday, and was fined 5 shillings, or the rising of the court. A charge of having murdered Mrs. Macnamara was read, and on the application of the police a remand was granted till Tuesday next. The following charges were also held over till Wednesday: — having in his possession two gold brooches, suspected of having been stolen; assaulting Constable Holtsbaum while in the execution of his duty, and damaging that officer’s trousers. Later in the day Baxter told the police how he entered the house, and conceded with a full confession of the murder.

On Thursday last he left his home, a cottage next door to the factory, on the opposite side to where he committed the terrible deed, and took with him a tent and other things. He told his wife be was going to Nyngan.

He walked along the railway line, and pitched his tent in the scrub near Homebush. He remained there until Sunday, when he started to return, and at 1 o’clock on Monday morning he went to his home.

He did not enter the cottage, however; but passed along the yard, and by climbing: to the roof of an outhouse built against the factory wall, it was an easy matter to reach up a few feet still higher, and then drop over into the factory yard.

The locality was very dark, and Baxter, stealing along the outskirts of the buildings, reached the email double gates leading to the house near the office. Both doors leading to Mrs. Macnamurra’s room were securely looked.

One opened from the hall of the foot of the staircase and tho other stood faking the small verandah overlooking tho factory yard. The watchman was somewhere about tho factory on his rounds, and Baxter pushed his bludgeon through the glass in the double doors outside. He placed his hand through, turned the catch back, and was beside the sleeping women.

Whether he first of all murdered the woman or was disturbed in his search of the boxes and then committed the murder has not been told.

That Mrs. Macnamurra found beaten about the head and with a strip of sheeting round her throat wore subsequent facto. Baxter left tho room by the door he had entered, walked along the verandah, and then opened an unlocked door and was in the hall.

He passed on by the front door of the house, as was shown by bloodstains there, and went away to Homebush again.

About eight hours later he was arrested in Bridge road for drunkenness. When news of the murder reached the Burwood police the bloodstained articles in Baxter’s possession aroused their suspicions, and, as has before been told, he mode a dash for liberty when returning from the bush where, he told the police, he had his humpy. The bludgeon used By Baxter was made from a piece of wood obtained on his way to Homebush.

When found on the roadside on Monday night the unstained port revealed the fact that it bad been made quite recently. ‘ I took it with me to defend myself,’ he remarked to the police on Tuesday. The City Coroner will open an inquest on the victim at noon on Monday next.

The Burwood police on Tuesday made a search in the bush for what Baxter bad called his ‘ humpy,’ and to which he was supposed to have been leading them after he was arrested.

The officers at first thought, when they had been, walking through the scrub, that it was nothing but a hoax, had returned to the station, Subsequent happenings, however, proved that Baxter had taken a tent from home, It was still pitched when the police came across it in tho scrub at Flemington, on the outskirts of Homebush. They gathered in the tent, blankets, and miscellaneous articles belonging to Baxter, and took them to the Burwood Police Station.

The trial of Nicholas Baxter, charged with the murder; of Mrs. Mary McNamara, aged woman, at Enmore, was concluded at the Criminal Court to-day.

Accused made a lengthy statement in which he said he did not know what he was doing at the time of the murder, as he was not in his right mind. He attributed the collapse of his mental faculties to the fact that for years he had worked 90 hours a week.

He called as a’ witness his wife, who stated that he had been strange in his’ manner for 18 months. ‘Dr. Bohrsman. who had attended accused for several years, regarded him as of weak intellect. Dr. Paton stated that accused had shown no signs of insanity during his confinement in goal. The jury after a brief retirement returned a verdict of guilty, and accused was sentenced to death.

The only, request made by the prisoner was that his wife should ‘not be present while the sentence was passed.

Nicholas Baxter was hanged in Darlinghurst Gaol this morning for the murder of Mary McNamara at Enmore. The whole affair was carried out quietly and quickly.

Apart from the representatives of four daily newspapers, only officials were spectators of the scene. During the morning the condemned man was visited by the Rev. Father Barry, of St. Mary’s Cathedral, who had been in constant attendance on him since Baxter, was placed in the condemned cell, and from whose, ministrations he derived much consolation.

He was also visited by two Sisters of .Mercy, who left him a few minutes before 9 o’clock this morning Father Barry, however, remained with him to the last, and sought to comfort, him with words of hope. The many formalities of old executions were dispensed with, according to high authority the demanding, of the body by the sheriff is a fiction.

A few minutes before 9 the Executioner and his assistants went to the condemned cell and pinioned Baxter’s arms.

About three minutes after the gaol clock struck – the condemned man appeared at a doorway leading on to the drop. His spiritual adviser was concealed from view behind the doorway, although he accompanied him to the edge of the scaffold.

Baxter was clad in the regulation grey gaol uniform, wearing a tight fitting whitecap, and his arms tied behind, him.

From a momentary glance which was obtained of him he did not appear to have suffered by his incarceration. Although pale, he looked fuller in the face than at the time of his arrest, while his short beard appeared to have thickened and grown more regular.

Without a sign or word he walked unassisted to the drop. Ho gave one glance down to the yard in which the reporters were standing, then gazed on the drop, made a light movement as if to plant his feet solidly upon it, and in another couple of seconds the executioner emerged and placed the rope round his neck, drawing tho knot tightly round under the right ear.

That official then drew down the long flap of the cap over Baxter’s face. Giving the signal the bolt was quickly drawn the doors of the trap opened, and Mrs.’ Macnamurra’s murderer hung lifeless, with a string of rosary beads in his right hand.

Death was instantaneous, not the movement of a muscle being discernible.

During his incarceration Baxter had given no trouble, to the gaol officials. He had been visited frequently by his wife and children, and a commutation of his sentence never appears, to have been considered seriously, by him.

He was perfectly resigned to his fate, last night he, slept, fairly well and awoke quite, refreshed this morning. 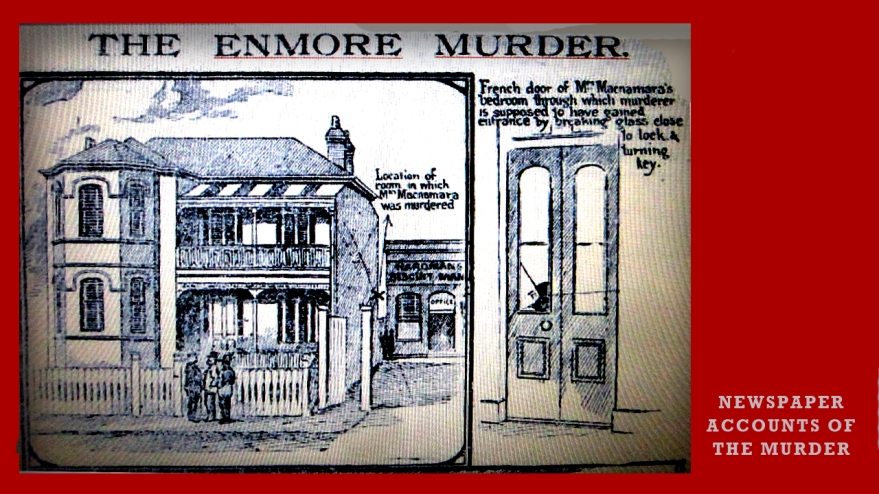